So, five minutes ago, I discovered that s-bend (also known as swan bill) corsets were a thing. Apparently, they were invented in the 1890s by Inès Gaches-Sarraute (a medical doctor) as a healthier alternative to regular v-shaped corsets (that is, corsets designed to give women the desirable v shape at the waist), the idea being that it didn’t put so much pressure on the abdomen. They were all the rage from about 1900 and into the early 1910s.

Below, you can see the finished effect and how the s-bend got its name.

The straight busque forces the pelvis backwards and the bust forwards. Despite the good doctor/corsetiere’s intentions, the health benefits were minimal, given the extreme strain placed on the back.

Fortunately, in the 1910s, waist lines rose to pretty much regency height (think Rose in Titanic) and women’s backs and waists were safe for a while. I’d laugh except that, more than a hundred years later, we still torture ourselves for fashion. Stilettos, anyone?

So I was reading a book the other day when I came across the following (paraphrased) sentence:

“The empire line dress she wore accentuated her small waist.”

No. No, it didn’t. Because this is what empire line dresses actually look like.

And, you’ll notice, the one thing they don’t accentuate? Yup. The waist. They do wonders for the bosom though.

Now, I am by no means an expert on 19th century fashion (or any fashion, if we’re being honest) and I’m sure I make plenty of mistakes in my books when it comes to clothes. But this was an egregious error for someone writing in the regency era to make. So, thought I, let’s track those waistlines and other major fashion developments in a handy beginner’s guide using lots of pretty pictures of extant dresses and movie costumes. That way, we still won’t get it right all the time but hopefully we can avoid any major howlers. And, lo, this post was born.

I think women must have breathed a bit easier in those empire-line gowns. Their corsets wouldn’t have needed to be cinched quite so tightly. Unfortunately, by the 1820s, waists had dropped again and skirts were fuller.

By the 1830s, when Queen Victoria took the throne, the waist drop is complete, corsets are cinched tight again, and the skirts are taking on the bell-shape we associate with the Victorians.

In the 1840s, necklines became lower (note the fichu in the image on the left below, which preserved a lady’s modesty despite “plummeting” necklines) and waists narrowed to a V. See how the waistline has continued to descend?

The 1850s is when the first artificial cage crinoline was invented and, not coincidentally, the decade in which skirts got really, really wide. And you did not want to stand next to an open flame while wearing one of these:

The silhouette of the 1860s is very familiar to people because of films like Gone with the Wind. Skirts got narrower at the top, but even wider at the bottom and fuller in the back.

The 1870s are when the bustle era began. Skirts slowly narrowed and the backside ended up piled with fabric. The costume from The Age of Innocence below is perhaps my favorite film costume of all time.

The bustle had a resurgence in the the early 1880s and became more shelf-like. One well known caricature shows women re-imagined as snails. At the same time, the reform dress movement was catching on, which resulted in a more natural shape as with the tea gown in the middle below.

Which brings us to the 1890s when the bustle and crinoline were both abandoned completely. The waist was extra small but skirts followed the natural line of a woman’s body. It was also the decade of massive sleeves.

Now in a work of fiction, most of this doesn’t matter, first because fashion-sense varied then just as it does now, and, second, because how much detailed description of dresses do you really need to include? But if you say a gown has an empire waist, don’t also say that it accentuates the wearer’s waist because that’s… well, it annoys me and, more importantly, it might take your reader out of the story.

Mostly though, I just wanted to post pictures of pretty dresses.

If you write historical romance of the non-closed door variety, sooner or later you’re going to find yourself researching undergarments. I’m sure there are lots of places on the internet where you can find all the information in one place, but one more won’t hurt. My books are set in the 1880s-90s, so that’s the period I’ll cover in this post.

I can’t remember who called the appearance of Victorian women in photographs ‘well-upholstered’ but the description is spot-on. Unsurprising too, once you realize how many layers they had to put on every morning to be considered ‘decent’.

First your well-bred lady (probably with the help of her maid) would put on a chemise:

The chemise would be worn tucked into the drawers. Or you could opt for a combination, which was basically the two garments stitched together without all the excess fabric. Then you’d add a corset which would be attached to your stockings with a suspender belt.

Then a corset cover:

Or, if it was the part of the 1890s when massive sleeves were in, you need wire sleeve supports:

Give or take the odd sleeve support and varying the size of the bustle, you’d end up looking something like:

There. Now she’s ready to put her dress on. Assuming she still has the energy. 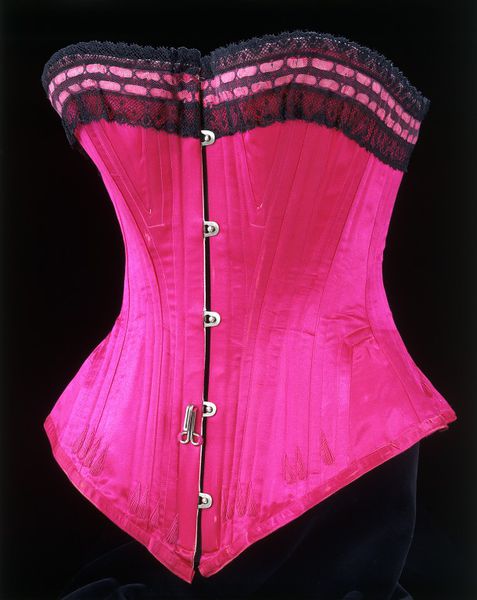 Sometimes I think if it wasn’t for costume dramas, we’d have convinced ourselves that Victorians dressed entirely in sepia tones.  One of my favorite parts of researching the Victorian era has been discovering all the amazing and colorful clothes wealthy women wore.

When I started writing, I had no idea how character development could dictate costume or how useful descriptions of clothing could be for conveying small nuances of character.

Before I get into specifics, I want to note that I almost never use just one image to help me describe clothing (or for that matter faces). Half the fun for readers is using their imagination and I don’t think they particularly like to be told “No, this is what that dress/face really looks like.” But I like to use visual aids while I’m writing. It helps me keep things historically accurate and reminds me that my male protagonist will never unzip my heroine’s dress.

In the prologue of my first manuscript Ruled by Desire, my heroine Francesca is young enough that she’s still being told what to wear by her guardians. Hence these otherwise out of character inspirations:

The scene is in the hero James’s point of view. Pretty though the dress is meant to be, he takes a dim view:

“Rows of white ruffles covered her from neck to ankle. All that fabric obscured her figure, but she might be hiding a decent bosom under there for all he knew … She was a perfect debutante. Girls like her thronged the ballrooms of London during the season. If he discovered they assembled them in a factory somewhere, he’d feel only mild surprise.”

The description of the dress is brief but it tells us that Francesca is following convention when it comes to her wardrobe, something that has changed by the time we meet her again:

“She’d cast aestheticism aside for less practical attire, taming and restraining her unruly curves. The ruby-red silk, though vivid and unashamed like its wearer, revealed no more than was proper. He saw a hint of upper arm bracketed by short sleeves and long white gloves, and the gentle swell of her décolletage almost always concealed behind the black feathers of her fan. She didn’t go out of her way to display herself, but she disdained to hide.”

This red dress is one of the few times I didn’t use something from the era as my guide. Instead I used this costume from The Age of Innocence:

I’ve loved this costume since I saw the movie back when it first came out.

As for James himself:

“He put a clean handkerchief into her hand. “Take care of it. It’s very fashionable.”

She tried to smile, but it came out wobbly. “A fashionable handkerchief? I never heard of such a thing.” She accepted the small white square and unfolded it. His valet must have slipped it into his pocket this morning. Four neat creases divided it into precise quarters. So much care taken over something insignificant.”

James is rich and privileged, from a set and rank that take fashion very seriously. But whereas an aristocrat might be socially prominent enough to flout the rules, James, as a mere gentleman, must make sure he dresses the right way. We also see how puzzling and trivial all this seems to Francesca.

One of my favorite items that I found was this brooch:

In my story, it belongs to James’s aunt, Mrs. Price.

““What an extraordinary brooch,” he said, after he’d taken a sip of tea. Actually brooch didn’t seem the right word for what was in fact the stuffed and severed head of a hummingbird, its beak dipped in gold, pinned to the breast of her lemon yellow gown. It must have been a beautiful creature once. Even now, its feathers shone red and gold in the light.

“You like Freddy, do you?” She stroked the bird under his chin, pursing her lips in thought.

Mrs. Price isn’t an out an out villain, but she’s extremely selfish. It doesn’t occur to her that there’s anything cruel or macabre about this bit of jewelry. She sees nothing inconsistent in her naming of the dead bird. Similarly, when she commits a cruelty, it never occurs to her that she might be in the wrong or that there’s any other point of view.

Poor Freddy. Since I can’t bring myself to end the post on that image, here’s a quick slideshow of dresses that I loved that didn’t make it into the story.

The Madness of Miss Grey Trailer

The Ruin of Evangeline Jones has a release date! Alex’s story will be out on April 27th 2020.